There is a good chance that new Grand Slam winners will be crowned at the last major tournament of the year, which will, in all likelihood, be the farewell event for the legendary Serena Williams.

There were some fantastic thrills and spills at the US Open last year. Novak Djokovic was just one step away from winning the calendar Grand Slam and becoming the first player to win 21 majors, but Danyil Medvedev of Russia beat him in three sets in memorable circumstances in the final. And the women's final pairing was a match that few would have predicted. The then 18-year-old Emma Raducanu of Great Britain overcame Canada's Leylah Fernandez, who turned 19 during the tournament, to become the first player in the open era to win a Grand Slam from the qualifiers and without even losing a single set.

This year, Djokovic will certainly not be able to march on and win his 22nd GS trophy (he collected his 21st at Wimbledon in July), and he will not be able to compete in New York because he has not been vaccinated against the coronavirus. Raducanu, however, will be there but has very little chance of defending her title and could be beaten in the first round by France's Alizé Cornet.

Medvedev, the men's winner in 2021, is one of those who should be there in the final. Though mathematically the 26-year-old world number 1 player, who was forced to miss Wimbledon because of the organizers' sanctions against Russian players, could be dethroned by four tennis players, there is hardly a more effective player on hard court. He was a finalist at the last two Australian Opens, reached the finals and semifinals, and won trophies at the US Opens. His form hasn't been bad either. He won in Los Cabos, and although Nick Kyrgios unexpectedly knocked him out in Montreal, he reached the semifinals in Cincinnati. Now he could fight back in the fourth round against Kyrgios, who should also be added to the list of players we can imagine making the top. Not only did the sport's daredevil march to the final of the grass-court Grand Slam, but he then won in Washington, reached the quarterfinals in Montreal, but was quickly and easily knocked out in „Cinci” by the Americans' best hope, Taylor Fritz. By the whim of the draw, Kyrgios will face his best friend and doubles partner Thanasi Kokkinakis in the first round in New York which is going to be a special encounter. 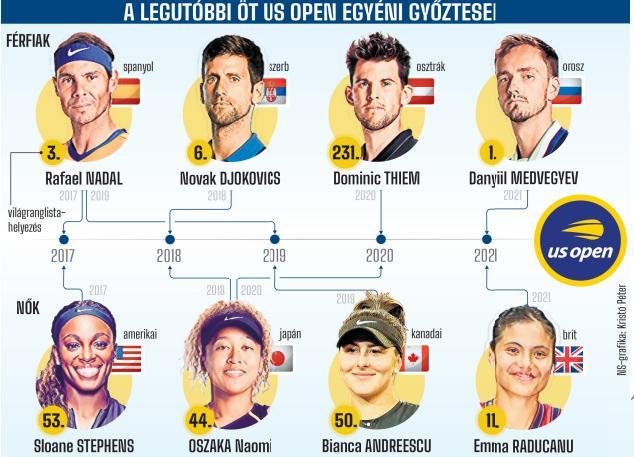 This year, Spain's Rafael Nadal, who is now the only player to hold a record 22 Grand Slam trophies, added to his miraculous Australian Open win a Roland Garros victory. However, unfortunately, he was unable to play his Wimbledon semifinal against Kyrgios due to an abdominal injury, although he could have been a great threat to Djokovic in the final. In Cincinnati, he lost his first match against the later tournament winner Borna Ćorić of Croatia, but you can never write off Nadal. While his relatively early exit would not be a sensation, we would rather bet on his unsurpassed playing ability and talent to take him to the top again, especially as the field includes neither Djokovic nor Germany's Alexander Zverev.

There are also other great players who've not won major tournaments, and with a lucky alignment of stars, they could play tricks on the above-mentioned three. Greece's Stefanos Tsitsipas is capable of excellent performance on a hard surface and warming up for the final with a Cincinnati final. Poland's Hubert Hurkacz won in Miami last year and played in the final in Montreal this year but has never reached the third round of a hard-court Grand Slam - he could break this in the United States. The Italian Matteo Berrettini's style and best hits are a perfect match for the US Open surface, but in many ways, it has been a bad year for the Wimbledon finalist, who lost both of his hard-court matches this summer. The 19-year-old Carlos Alcaraz was a quarterfinalist at the US Open last year, and as there are signs that he is not yet mentally able to cope with the special atmosphere of a big tournament, we are not going to risk putting him among the favorites this time. We are delighted to have two former GS champions, Austria's Dominic Thiem and Britain's Andy Murray, on the 128-man draw, but they are certainly not adding anything to their home showcases.

In the women's singles, 23-time Grand Slam winner and home favorite Serena Williams will be competing in what is likely to be the last tournament of her career. She will probably survive the first round against Montenegro's Danka Kovinić, despite having lost five of her last six matches, but world number 2 Anett Kontaveit of Estonia will be a tough opponent in the second round. Of course, it would be a very nice Hollywood story if the younger Williams sister were to catch up with Margaret Court, the 24-time Grand Slam winner, at the end of her career, but it would require a huge imagination to envision that.

It's not even easy to guess who will win the final because we could list dozens of players among the ladies. Before Roland Garros, it seemed clear that Iga Swiatek was the best and would be hard to beat - and no one could in Paris. At Wimbledon, the Polish star still looked the most likely to win, but she has only survived two rounds and now she is "only" one of those who could reach the very end of the second week.

Whether it will help you navigate or lead you astray, we don't know, but in any case, Romania's Simona Halep won the first of the two 1000-point key tournaments leading up to the event in Toronto. And after her semifinal at Wimbledon, she could easily be in the last four again. The winner in Cincinnati was France's Caroline Garcia, who has won on three different surfaces in the last three months, but it is hard to see her moving forward at a major. At 28, she has only one quarterfinal appearance at Roland Garros and nothing else...

Other than Halep and perhaps Arina Sabalenka of Belarus, there is no real character and personality in the top ten of the world rankings that could make a big splash - Spain's Garbine Muguruza could be one because of her past, but her present shows she lacks that striking effect.

In the singles main draw, there are three Hungarians to cheer for, with Márton Fucsovics in the men's singles and Anna Bondár and Dalma Gálfi in the women's singles.