Marin belongs to FTC – the total value of NB I has increased by nine billion forints since last year!

After the summer transfer window, the estimated total value of players from the Hungarian Nation Championship teams has set a new record. Not only does this show that more and more elite players come to Hungary, and more and more foreign national team footballers are playing in the Hungarian topflight...

Although the transfer window officially ended more than two weeks ago in NB I, footballers free to transfer can still be signed, and the squads have changed in recent days. However, since no big move is expected now, it is worth summing up the trends in the domestic market during the summer. As far as the main figures are concerned, as in the previous three seasons, the number of new footballers was around 90 by mid-September (as of Saturday, 88 this year, while 93 arrived last year, and 86 two years ago), and the number of departing ones exceeded one hundred again (107; 94 last year, but before that 119 and 104).

Most of the new players (14) were signed by Mezőkövesd while also the most (17) left them. It is interesting that after their promotion in 2016 (when the current head coach Attila Pintér spent his first period at the club), they changed their squad in 100 places in a year and a half. After that, there were not many changes during the summers: for example, only eight players arrived until last September. The situation changed after Attila Pintér returned and began to restructure the squad. As our framed text shows, it is a conscious decision that the number of foreign players at the club decreased by seven in the summer, and this also contributes to the fact that there are currently 35 fewer foreigners in the entire OTP Bank League than in the previous season. Another issue is that the foreign players still make up 41.6 percent of NB I. Hungary and Croatia (41%) have the highest rates among neighboring countries, but it is similar to Slovakia (40.5%), while the lowest rate is in the Serbian (17) and Ukrainian top leagues (19). 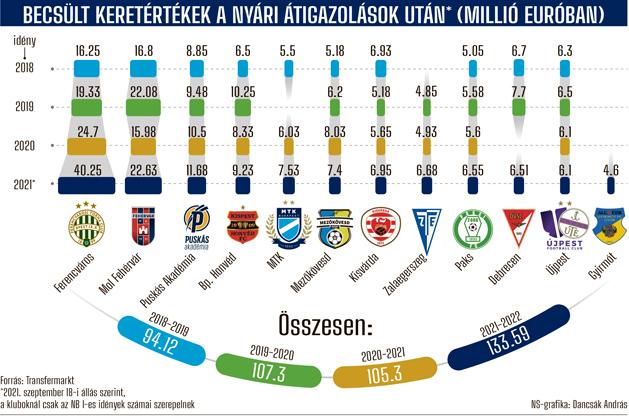 LIKE THE 2016 ONE, THIS YEAR'S EUROPEAN CHAMPIONSHIP DIDN'T MAKE THE HUNGARIAN PLAYERS MORE ATTRACTIVE EITHER

Along with Mezőkövesd, ZTE has verified the greatest number of new players (11). The Zala team was still number 1 with 18 contracts last summer. That number has fallen now, but it is still considered high, also because the biggest number of loan players (4) arrived at Zalaegerszeg. Furthermore, in a tie with Fradi, ZTE signed the most foreigners (7) while Paksi FC is the only one in NB I that still hasn't signed a foreign player. The fewest new faces appeared in Újpest's dressing room this summer, with only four arriving - all four are foreigners. However, nine have left the club and, if we add to that the fact that several key men have suffered injuries, we can understand why head coach Michael Oenning's rather tight squad has not been able to win in six rounds. The fewest (only 3) left rookie team Gyirmót.

The biggest disappointment of the summer transfer window is that, despite the bravado of the European Championship, there has been no increase in demand for Hungarian players in the international player market. Twelve NB I players were included in the Hungarian squad at the European Championship – not counting Szabolcs Schön (FC Dallas) and Dániel Gazdag (Philadelphia Union) who signed with Major League Soccer in the United States. Among them, FTC captain with expiring contract Gergő Lovrencsics (Hajduk Split – Croatia), MTK's Roland Varga (al-Ittihad Kalba – UAE), as well as top scorer of Paks, János Hahn (DAC – Slovakia) and Fehérvár defender Bendegúz Bolla (Wolverhampton – England, on loan to Grasshoppers – Switzerland) were sent abroad. The latter two did not play at the European Championship, but neither Lovrencsics nor Roland Varga switched clubs thanks to the continental tournament as neither of them was a key player in the national team. At the same time, after the European Championship, only Ádám Nagy, who's a key player not playing in Hungary, moved from English second-tier Bristol City to Italian second division Pisa. In the summer, a total of 11 Hungarian players from NB I went abroad, which is a step up from last year's four, but no one has been added to the top league this year. Bolla has been signed by an English top league club, but for the time being, he can prove himself on loan in Switzerland. In addition, as last year, six former U-team players returned to the first division, so the total number of players playing abroad increased by only five.

THE HUNGARIAN TOPFLIGHT IS WORTH NINE BILLION FORINTS MORE

The most positive development of the summer and the last year is that the value of NB I has clearly increased, its international image has improved. We can say this not only because the value of the teams has increased from 105 million EUR to 133.59 million EUR (approximately HUF 46 billion) on Transfermarkt breaking all previous records, but also because in the previous cup season, only Ferencváros was able to qualify for the Group Stage of the Champions League from the former Eastern Bloc champions (except for states of the former Soviet Union).

Thanks to this and the summer transfers, the estimated value of the FTC has increased by more than 15 million euros to 40.25 million euros since last year. Despite offers from wealthy Belgian and Danish clubs, what's more important than pure numbers is that the Hungarian champions are now at the level of being able to keep one of their best players, Norwegian national team member Tokmac Nguen, to lure back Bosnian national team player Muhamed Bešić, who played in the Premier League last year, to sign German former national team player Marko Marin, to buy also Bosnian national team Stjepan Lončar's and Norwegian Kristoffer Zachariassen's right to play (the former priced at 2.5 million and the latter at 1.5 million euros), and to sign 20-year-old Željko Gavrić, the Serbian U21 national team player from Crvena zvezda, who is currently the most valuable player in NB I with an estimated value of 4.5 million euros. However, the real value of the FTC's squad cannot be better illustrated by the fact that sixteen of the team's 21 foreign players (the most in NB I) are active national team members for at least a year. If we also add the Hungarians, this number reaches 20: four of them – Endre Botka, Dávid Sigér, Oleksandr Zubkov from Ukraine, and Róbert Mak from Slovakia – also played in the summer European Championship.

Numerous national team and youth team players see the opportunity for development in the Hungarian topflight, and it is not only Ferencváros that can sign footballers of this level. For example, five players from four NB I clubs played at the European Championship: Nikolai Alho (MTK) from Finland, Visar Musliu (MOL Fehérvár) and Kire Ristevski, who has since left Újpest, played for the North Macedonian team, while among those arriving in the summer, Fehérvár's Yevhenii Makarenko from Ukraine also played in two European Championship matches. Including the Hungarian national team, thirteen footballers from the Hungarian league played in the continental tournament, the highest number of the neighboring countries in a tie with the Ukrainians. Meanwhile, for example, only one footballer from the Austrian Bundesliga, none from the Serbian, Romanian and Slovenian leagues played.

In the summer, in addition to Fradi and MOL Fehérvár (beside Makarenko, Michael Lüftner can call himself a Czech national team member, Kenan Kedro a Bosnian, Lamin Jallow a Gambian one), Kisvárda (Jasmin Mešanović, Bosnian), Puskás Academy (Libor Kozák, Czech), Budapest Honvéd (Nenad Lukić, Serbian), MTK (Gheorghe Grozav, Romanian; Ylber Ramadani, Albanian), ZTE (Emir Halilović, Bosnian; Eros Grezda, Albanian), DVSC (David Babunski, North Macedonian) and Gyirmó (Florent Hasani, Kosovo) also signed national team players. There are a total of 16 new signings who have played for their country's national team, most of them in the last two years, but if we count Ryan Mmaee of Ferencváros, who made his debut for Morocco in the fall, we can talk about 17 national team player acquisitions. Even transfer fees were paid for seven of them by their new clubs.

Together, the above all contributed to the fact that the estimated value of most clubs, not only Ferencváros', has increased, thus increasing the value and quality of the league. Now, we are far from talking about the internationally depressed league as ten years ago when, during the summer transfer windows, NB I was flooded with south Slavic players for free who were not needed elsewhere. The next level of progress could be if, in addition to Ferencváros, another Hungarian club could regularly fight its way into the group stage of a European Cup series in the future. The other challenge would be to be able to outstretch more and more Hungarian players in addition to foreign players playing in their national teams so that far more Hungarian footballers can reach the strongest European leagues than is currently the case.