Shaoang Liu: My brother gave me strength from a distance

Shaoang Liu will return to Hungary from the World Championships in Montreal with four gold medals. The younger Liu brother will start his vacation overseas after an extremely long but very successful season.

– Do you still remember the moment in January when you were notified that you tested positive for coronavirus?
– I don't really want to think back to it," said Shaoang Liu, who was only able to travel to the Beijing Olympics later because of the infection, from which he returned home with a gold and two bronze medals. – But I couldn't just give up. The year of the tiger began, and I was born in the year of the tiger.

– Is it that important?
– Oh, no, I was joking, but little things like that can give me strength. And I needed strength. When that call came... When it struck me that I couldn't travel with the team to the Olympics when I realized there could be a bigger problem – I had to get myself together mentally so I wouldn't fall deeper. Then I had another fall in the season because it was not easy to deal with the fact that the World Championships was postponed by three weeks, so I had to concentrate for another three weeks and hold on because I wanted to participate in the competition. Even if it turned out that my brother Shaolin was going to miss it and then that my coach Lina had coronavirus.

IT'S PROVEN ONCE AGAIN THAT HUNGARY HAS A GREAT TEAM

– In Montreal, you said you were alone because neither your brother nor your coach was by your side. Reassure me that solitude doesn't mean you were left alone...
– Not at all! This sentence merely meant that the two people closest to me were missing from my side, but it's proven once again that we have a fantastic team. If we didn't, we wouldn't have achieved such results. Neither in Montreal nor elsewhere. Everyone who was at this World Championships held my hand and upheld me. Thanks to them, new successes came. Whereas... 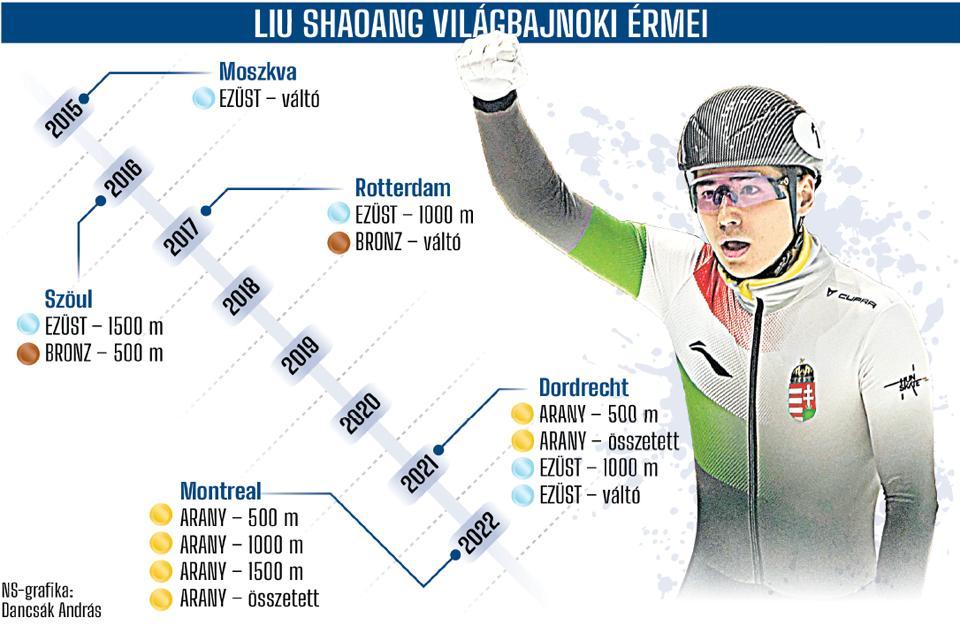 – Whereas?
– The plan was that our South Korean coach, Chun Jae-su, gave the instructions from the side during the races, but I discussed with him before the 1,500m semifinal that if I can't finish in an advancing position, I should skate in a way that I don't get into Final B either. I have said many times that this is the distance that I like the least. This World Championships was the last competition of the season, so I cannot say I was full of strength and energy.

– If you didn't feel the strength within yourself, how were you able to come up from fifth place to the first, and not because of your opponents' fault, but because you easily passed everyone?
– I'm not the kind of person who lets things go away before not trying. We knew that everyone was tired and everyone had a difficult and long season. I wouldn't say I competed in Montreal in the best shape of my life. Chun Jae-su and I also talked about the fact that fatigue and overload are visible in my technique, because it collapsed for this last race, and I did not concentrate as usual.

– Despite that, you opened the tournament by winning the 1500m... You then added the 500m gold medal shortly afterwards and went to bed thinking you could defend your overall world title the next day.
– Not at all. The feeling I had at the World Championships in Dordrecht last year or the Olympics in Beijing in February did not come on Sunday either. This time I didn't wake up feeling be an overall world champion again.

– You did. You finished the World Championships with four individual gold medals. Yet, there are still some who say that several star skaters missed Montreal. What do you want to say to them?
– Yes, several skaters were missing from Montreal because they did not want to or they could not compete in the World Championships, and some were prevented from stepping on ice due to their positive coronavirus test. The world title is a world title, and the result is a result in any form, and anyone who has seen my skating can hardly pick on me.

– From the outside, it didn't look like your technique had fallen apart a little bit as you just mentioned.
– I had a great time on the ice, I enjoyed the race, but I did not finish this world championship with "technique," but with the help of my experience over many, many years. For example, by staying calm the whole time, and not doing anything stupid.

HE FELT THAT HIS OPPONENTS THOUGHT HE WAS INVINCIBLE

– But it was worth it because you made history once again. You are the first Hungarian short track speed skater to win a World Championships gold medal in 1500m, the first to defend your title, and the first to win two golds in one day. Besides the successes, is this also important to you?
– Of course, it is. It is also a kind of duty because if we don't write history, then who does?!

– After your training before the competition, you didn't necessarily talk about gold medals.
– I dismissed the fantasies because it's not good to stand on the starting line and think I'm the champion - the only thing that's going to get results is to start the competition wanting to prove yourself. Over and over again. When I left for the championships, I really didn't think about medals, but then I saw on my opponents that they really wanted to succeed. Then I thought, I want to succeed as well.

– You played with the field like a cat with a mouse every time you competed. Did you feel that the others were afraid of you and that they thought you were invincible?
– Something similar struck me on the ice – already on Saturday, the first final day. Then it escalated on Sunday.

– You are the most successful skater in Hungarian short track speed skating, and you have already written your name in the history book of Hungarian sports with your successes. How are you going to motivate yourself in the future?
– For example, with another title missing from my collection because with the men's relay team, we haven't won a World Championships yet. And the fact that we have achieved sporting success again doesn't mean that this is the end – there is always going higher! We can double or even triple the win. I love, we love short track, this is our job, this is where have to do something, and this is what we're good at.


– Hopefully, you and your brother will continue the success next year. Were you in touch with Shaolin during the World Championships?
– Of course. We were constantly texting each other; he could give me strength even from a distance.

– How about Lina?
– She as well. On the first day, for example, she asked me where to follow the World Championships on the Internet, but we didn't talk about anything professional. I think she felt that this time she didn't have to do anything. And I don't just know she's proud of me because she wrote me it...

– You're not going to Hungary from Montreal just yet because you're spending your vacation overseas. But before I "let you go," to your destination in New York, please, sum up this year!
– It could've been better...

– Are you serious?
– Yes, and I am primarily thinking about the Olympics. But what happened had happened, there's no reason to think about it anymore. Overall, of course, I don't lack anything.

HE RESPECTS ALL THREE OF HIS COACHES AS FAMILY MEMBERS

– We have concluded another Olympic cycle: what has changed the most in four years, how much different is this current Shaoang Liu than it was after PyeongChang?
– I don't feel like I've changed that much. Of course, I have become a more experienced skater, and I can feel this, for example, from the fact that there are more and more races for which I no longer receive a coach's instruction. This doesn't mean that we don't discuss tactics beforehand, my coaches don't tell me what to expect, but more and more people leave it to me how I solve the task. They know they can trust me.

– Three coaches lead the national team. How would you describe your masters?
– Lina has always been like my second mother, but Ákos Bánhidi and Chun Jae-su are also like family members to me – they are not only by my side in sports. I respect all of them, I never thought I should question any of their decisions, but that's true for every member of our staff. I never understood athletes who don't think that way. I told my coaches that I was the kind of soldier on this team who they know will accept their decisions and do whatever they ask of him.

– Some athletes fight with their coaches all the time.
– They may not even get to the top... Without dedication, it is impossible to achieve results and reach the top. Why aren't you saying anything?

– Because dedication is the first word that always comes to mind about you. This is your character in everyday life as well.
– I'm also trying to be a good human in the world.

VIDEO: THE FINALES IN MONTREAL

Kerkez Milos is developing at an incredible pace, and the Dutch are stunned to see how mature he is for an eighteen-year-old.

"Because of the Olympics and my younger sister’s death, it took me some time to find myself, but I think I did it."

He decided at a very young age that if he ever got far in his career, he would like to be a Hungarian national team player.