Hertha: I knew deep in my heart that I needed to help – Pál Dárdai

After Bruno Labbadia's leave from the club, it was expected in recent days that Pál Dárdai will replace him at Hertha that's currently ranked 14th in the Bundesliga. The Hungarian expert signed the contract until summer 2022, and Hungarian goalkeeper coach Zsolt Petry also joined his staff. After the official announcement, Pál Dárdai gave a short, exclusive interview for Nemzeti Sport.

– You've hardly planned it like so...
– Indeed – started Pál Dárdai on Monday evening to Nemzeti Sport. – I've led the U16 team since the summer. I've had a great time, enjoyed the job, and we've made a good process with the boys. It wasn't planned that I would sit on the senior team's bench.

– How did the management convince you?
– I had to convince myself. On Monday morning I was leaning towards saying not to accept it, but... anyone who knows me is certain that Hertha means a lot to me. I knew deep in my heart that I needed to help. We're not in an easy position. In fact, I'm taking over the team in a worse situation than I did six years ago. I overcame the first difficulty, though. When I said goodbye to the kids on Monday afternoon, I cried. I didn't think parting was this difficult, but enough of crying. I have no doubt that we'll have to put blood, sweat and tears into our success. Of course, if I didn't believe we could do it, I wouldn't be thinking about how we can earn a point, or points in Frankfurt on Saturday.

– Didn't the draw scare you?
– Our draw is not difficult; it's cruel! However, the team is strong! One of the most important tasks over the next few days will be to make the players believe that they're capable of doing more than what they've achieved so far. We have a tough job to do, and there's a crazy period ahead of us, but I'm convinced that we can solve this problem too.

– Do you think you'll spend at least another 4 and a half years at Hertha?
– At this level, things can change very quickly regarding this which my example also proves. The statistics show that it hasn't been two years since I left the bench, and Hertha had four coaches – with an average of six months were for each. So, I'm not planning anything more than six months ahead either. 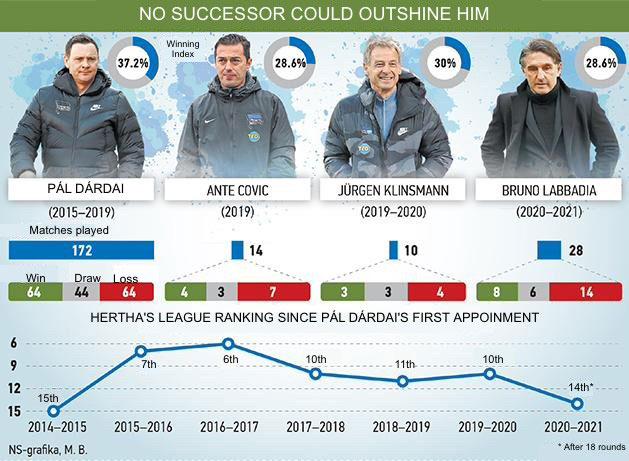