After a year at Nizhny Novgorod, LASK's four-year offer was attractive for Ákos Kecskés because he signed for a club with great potential. The future is promising, and he also likes the idea of fighting for big goals with the team.

A new chapter has opened in Ákos Kecskés' career. The 26-year-old footballer from Hódmezővásárhely – aside from a two-year loan in Újpest – has been a foreign player for 12 years, having played in Italy, Poland, and Switzerland, and this week he left Russia for Linz on the Danube in Austria. At the end of June, the six-time Hungarian national team center back was reported to be continuing his career with the Austrians. Although the report was credible, the transfer was long overdue - hardly surprising given the chaos of the war and sanctions on Russia and the fact that he was tied to his club Nizhny Novgorod for a long time under a contract. After reaching an agreement with the Russian Premier Liga's 11th-placed side from the previous season to terminate his contract, he traveled to Austria to negotiate a deal with LASK officials. However, the trip was a wild ride, too.

"I arrived in Linz on Tuesday, had medical examinations and various health tests, and after everything was in order, we signed the papers," Ákos Kecskés, who signed a four-year contract with LASK, told Nemzeti Sport. “As much as it was a long process to sign the contract, I'm glad that the change of clubs has happened. It wasn't easy to leave Russia, it was tedious and exhausting to get to Austria. On Sunday afternoon, I left Nizhny Novgorod by plane, and due to the airspace closure, I had a transfer from Türkiye. My flight from Moscow was due to leave for Antalya at 2 a.m., but we didn't take off until 6:30 a.m., so I missed my connection and had to stay in Türkiye. Therefore, I didn't arrive in Linz until Tuesday noon. If I look at it from a professional point of view, my first six months in Russia were perfect, but the second half of the year was a disaster. The fall season ended in December and then the war broke out in February, which played a big part in my career not going as planned in the spring." 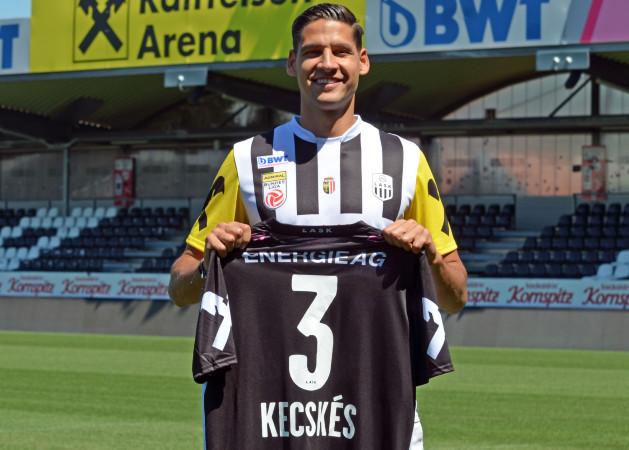 Indeed, when he was available, he played every fall league game, but this season, he only got a few chances from head coach Aleksandr Kerzhakov. Not surprisingly, he was looking for a chance to change clubs and countries as it was not easy to concentrate on football in Russia. He signed for LASK after twenty-one games in a Nizhny Novgorod jersey, and as mentioned above, he signed a four-year deal. It is rare for a Hungarian footballer in his mid-twenties to sign a long-term contract with a club in one of the top leagues above the Hungarian National League (NB I), and the Austrian topflight is in some ways far ahead of Hungary: the Austrian Bundesliga is the eighth strongest on the continent in terms of UEFA coefficients, while NBI I is only 27th and the Russian league is 10th.

As he had several offers, we asked him why he chose LASK, which finished second in the lower half of the league play-offs last season.

“I have considered several offers, spoken to many people, and Nizhny Novgorod has also indicated that the club would be happy to extend my contract,” continued the center back, who became the fifth Hungarian footballer in the history of the Austrian club after Péter Víg, Barnabás Liebhaber, Gyula D. Szabó, László Németh, and László Simkó. “I was impressed by the perseverance of Linz, I appreciated the fact that the management went out of their way to make me a player for the club. During the negotiations, I felt the confidence that was finally shown in the fact that my contract is for four years. I am happy to continue my career in Linz and I hope it will be a success story. In the last three seasons, LASK has reached the group stage of the international cup competition, twice in the Europa League, and most recently in the European Conference League, and even reached the knockout stages twice. The fact that a team this competitive at international level and has big plans for the future was a great asset for me to accept the offer. I'm looking forward to February when we move to our new 22,000-seat stadium. As I see it, the squad is getting stronger and stronger, which is why I decided to be a part of this project for the next four years. Our obvious goal is to get back on the international cup stage. As the Austrian topflight is eighth in the UEFA rankings, five of the twelve-team league qualify for the European Cup - for that reason alone, I do not see my transfer as a step backwards. The Russian league is a strong one, but there is a trend for a lot of foreign players leaving the country, with the top teams losing their best footballers, which will have a negative impact on the otherwise good quality. My former team Nizhny Novgorod only has three foreign players left out of the eight total. The Austrian offer was attractive because of the club's potential, its promising future, and the fact that LASK is looking to finish in the topflight after last season. Besides, the team plays a four-defender system and dominates, controls the game in the vast majority of its matches."

As far as the national team is concerned, the center-back has always informed national team captain Marco Rossi about his transfer process, and the Italian coach has supported the transfer: he considers it a good move for the player to continue in Austria, so we can say that he is in a good position from the national team's point of view as well. He started training immediately after signing the contract, but as he told us, he is not feeling 100%, he has a minor Achilles tendon problem and could not be signed up for Saturday's match against Wolfsberg. He is yet to make his debut, but if all goes well, it will be up to head coach Dietmar Kühbauer to decide whether he will feature in the home clash against Rapid Wien next week.