The match between Ferencváros and Slovan in the Champions League is taking place, and the history of the teams' flagrant match is horrifying... Even almost thirty years later, the photos taken of the brutality of Slovak commandos during the Slovan-Ferencváros European Cup match in September 1992 are shocking. The ski-masked thugs went on a rampage in the Hungarian fans' sector, and the fans fled the stadium in shock with broken bones.

The photos are shocking even after almost thirty years.

Following the unjustified brutality of the Slovak police, the section of Hungarian fans in the national football stadium resembled a battlefield, and while most of the Fradi fans visiting Bratislava were fleeing from the black-masked commandos hunting Hungarians, a young woman in the front rows of the stands was sobbing in shock. The medical staff wearing white coats had already arrived at the front of the fence in front of the sector when the local 'policemen' again targeted the girl and some of the Hungarians trying to protect her. In a video still available on the internet, a baton is seen being shoved into the eyes of one of the fans at close range...

"This seems to have been a political provocation"

The case, which erupted after the rampage of Slovakian police officers, closed with a verdict by UEFA's disciplinary committee without evidence, which seemed unfair from a Hungarian point of view, but it would be difficult to say exactly when it started. On September 16, 1992, Ferencváros played against Slovan Bratislava on the opponent's home ground in the predecessor of the Champions League, the European Cup. A report in the Nemzeti Sport newspaper at the time mentions that a few days before the first leg of the match, Hungarian and Slovakian police had mutually agreed on the security of the clash. Apparently to no avail, at an impromptu press conference at the BRFK (Budapest Police Headquarters) the day after the match, the then police chief of District IX district, Lieutenant Colonel István Gémesi, said that the organizers had not taken the Hungarian side's advice into account.

Even in the hours before the match, which ended in a 4-1 Slovan win, you could sense that something was in the making. Nap TV made a video report of the events, in which the Fradi fans, who were interviewed before the starting whistle blew, were already agitated, and upset by the unjustified harshness of the local police - some 300 of whom were involved in providing security, including 24 mounted police. One of the groups had not even gotten off the train but their red, white, and green flags were taken away, and a young man wearing a green and white T-shirt was kicked by the police before the interview. The confusion was also evident at the entrance. Fans from Hungary were shunted from one gate to the next, and some were asked for their tickets at the gate and then pushed outside the stadium. It can also be heard in the report that Slovakian fans were allowed into the section reserved for Hungarians.

"By all indications, this was an open political provocation. Those who invented it are far from European mentality. I don't know any facts that would justify the rampant brutality," Géza Entz, the then Secretary of State and the president of the Office of Hungarians Beyond Borders, told Nemzeti Sport after the incident. 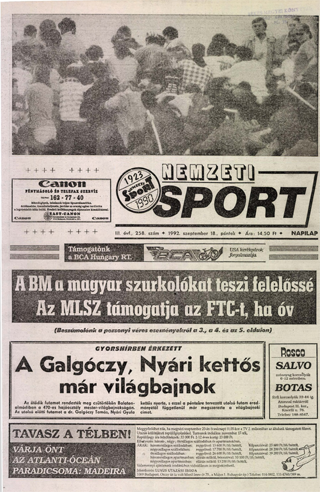 No one who spoke Hungarian was spared

Later, some people spoke of provocation, but the "calculation" did not work.

Mihály Havasi, Ferencváros' technical director at the time, told our newspaper the same thing, which was later confirmed by the fans: there were no fights between the two teams' fans before and during the match.

Meanwhile, on the pitch, it was a rather one-sided contest: Slovan was leading 3-0 against FTC, coached by Tibor Nyilasi, in the 56th minute.

However, the torture of Fradi fans only really began after that.

The first hit into the Hungarian sector was seen about four minutes later and there was no turning back after that.

Nap TV's footage shows five black-masked commandos with batons facing the only youngster wearing a white T-shirt, and after some exchanging of words, they start to hit him.

What happened next is probably still vivid in the minds of the fans present at the time. From then on, the uniformed officers hit practically everyone they could reach, including women, girls, and children. 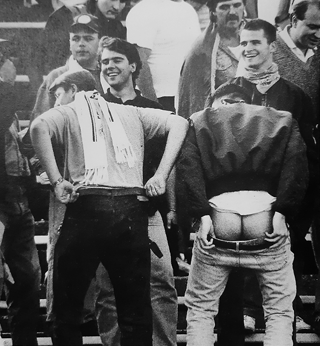 "My ticket was for behind the goal post, in sector C, where the commandos chased us after the third goal," said Ferenc Spohn, who called our newspaper's editorial office the next day. "Unfortunately, they not only chased us but also beat us to a pulp... I don't know what drove them. In this sector, Hungarians and Slovakians were sitting next to each other, with no fence separating the two fan bases. Nevertheless, apart from pointing fingers at each other to see what the result would be, there was not a single angry exchange of words. Soon afterwards, the commandos came at us from the back in a rush. If I sit three meters away, I get the first beat. They hit indiscriminately whoever they caught or who fell. A Slovakian photojournalist was beaten so badly that the poor woman was crushed, and her husband, who came to her defense, was also beaten.”

The terrified fans tried to escape and get out of the sector but were chased by the riot police. The video footages show them climbing over the fence to continue their rampage in another sector.

"People trained against criminals beat up girls and children and did not spare anyone who spoke Hungarian," István Szívós, the then executive chairman of Fradi, told Nemzeti Sport. “Whether it was a planned action or not, I don't know, but I am sure that the stormtroopers were not called to watch the match." 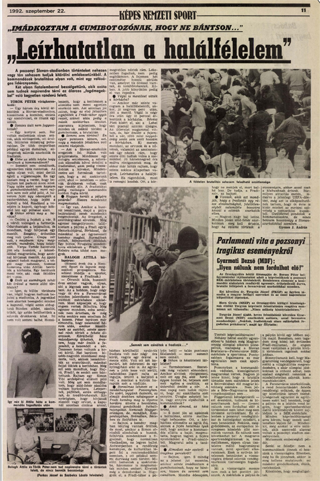 "From the video footage of the football match, the photos taken on the spot, the press, and the personal information of the participants, it can already be clearly concluded that the brutal action of the police and commando forces were in no way commensurate with the behavior of the Hungarian fans," Nemzeti Sport quoted Balázs Horváth, the minister without portfolio in charge of sports supervision.

After the incident, Ferencváros appealed the match, the club's view is that the events after the 60th minute affected the state of mind of the players, who could not detach themselves from the off-field events. The Hungarian club's delegation traveled to the hearing before the Union of European Football Associations' disciplinary committee with a videotape, 200 photographs, and 50 medical reports. In Zurich, they first heard the testimonies of the referees, followed by Slovan's and then Ferencváros' delegates. According to our on-the-spot report, the committee members somewhat reacted to the brutality of the black hooded men - but that was as far as it went.

The committee made a decision on the same day: the result of the match was confirmed by the result on the pitch, and both teams were fined 15,000 Swiss francs. According to the more than shocking written justification, the events that started in the 60th minute did not affect the result of the match as the locals had already gained a significant lead and the Ferencváros fans provoked police intervention, which went far beyond what was acceptable. In addition, the fact that Ferencváros had already been punished in 1989 and 1990 for fan disorder was taken into account as an aggravating circumstance.

The decision says a lot that UEFA has not presented any evidence to support its reasoning.

Even Slovan's management did not claim that Ferencváros fans provoked the intervention of the riot police.

A címvédő a favorit, de a megerősödő Barca is visszaülne a trónra – indul a La Liga!
UCL: Theoretically, we were fully ready, but in reality, we weren’t