Hungarian League: For that many goals, extra performance is needed – Martin Ádám

Martin Ádám, the top scorer in the 2021-2022 OTP Bank League, has finished the best season of his life, scoring 31 times in the topflight as Paks’ player.

– If someone had said a few months ago that Martin Ádám would be the top scorer of the 2021-2022 season with thirty-one goals, what would've been your reaction?
– If you said it at the beginning of the season, I would've definitely asked back: are you okay?! – Martin Ádám, the top scorer of the league season, who scored 31 times in 32 games, replied. – Of course, I knew I could score a lot, I did eight times last season, even though I often only came on as a substitute. But I did not expect such a successful year.

– When we spoke after the fall season, you said you had left behind a special period, as you had scored 15 times, which you haven't done in a single league season before. The adjective ‘special' has been enhanced...
– Yes, we managed to enhance it, and even though a footballer, from whom I received a lot of assists, transferred. I can make myself understood well with István Bognár, and although I also heard that I would score much fewer goals after his departure, I still had my opportunities. Bálint Szabó, Zsolt Haraszti, and Richárd Nagy are different types of footballers than “Stefi” Bognár, but they gave me great assists, and fortunately, the goals were not missed either.

– After the first half of the league was over, you said you now wanted your number of goals to start with a two. It doesn't start with a two, but you're hardly annoyed about it.
– I'm glad that number starts with a three! I can tell you that scoring so many goals is a big deal.

– This was your sixth league season in the topflight. You scored a total of 24 times in the previous five years, but now this number is 31 in a single season. What caused the huge improvement?
– There's a lot to bring up. I am no longer a young talent, but an experienced, ready-made footballer. My game now is so much more to score goals, and of course, György Bognár's idea of football was also necessary for this number of goals.

– If you turn back time, did György Bognár see the future when, referring to you during the summer preparations, he said that there is a player in the squad who can score as many times as last season's top scorer, János Hahn?
– They trusted me, which felt undeniably good! What our head coach said was not a burden but a task, and I am glad that I was able to show that he did not refer to me by accident.

– The first goal is always very important, but in the 3-2 lost match to Mezőkövesd Zsóry, the Ádám goal did not come. What was going on in your head then?
– I don't remember that anymore, but I was not happy for sure. Not because I didn't score, but because we lost! It's always the team that's important, the team is always first, but the party is only really good when I'm scoring the goals. I was not nervous, because I had my opportunities, the preparation went well, I scored in almost all of our games – and the first goal came in the next match.

– You had a streak where you scored 12 goals in eight league matches in a row. Could you make a wrong decision at that time?
– For sure! In addition to the goals, a lot of opportunities were missed, but I should not think about it, I have to move on. Mistakes are as much a part of football as other areas of life are not immune to it. The direction is only good if you learn from it and focus on the next task.

– Which three of the 31 goals can be up on Martin Ádám's podium?
– I would put the goal for Dénes Dibusz in the Groupama Aréna in the first place: after a high kick, I chested the ball, and after a bounce, I shot it into the right side of the goal – it was spectacular. My goal against Honvéd on home grounds is on the podium. I kicked the ball well from about eighteen meters, which bounced from the goalpost into the long corner. I would also probably put my goal for Fehérvár in the top three... There wasn't much time left on the clock when the opponent led 2-1, and I headed the ball into the left corner after János Szabó's pass. However, the real happiness was that we also got the winning goal.

– You're at the best age at 27, but do you think you can have another season like this?
– Time will give you the answer. Let's just say that I'd like to.

– You scored 31 goals, but we assume you owe a lot of thanks.
– I'm just a piece of the team, for this number of goals, we needed all the squad members. Everyone has a job to do, I have a job to do: especially to score goals. 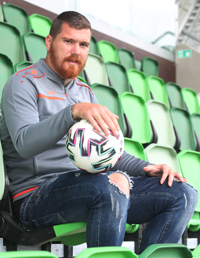 – You had offers in the winter, but it was known that you would stay in Paks until the summer. Do you have any idea regarding the future?
– The season is over, and it is slowly becoming clear which direction I am going. We'll see what my options are.

– It has been a topic several times recently, so you probably know who managed to score at least thirty goals in NB I last time.
– I am aware that Tibor Nyilasi scored 30 times in the topflight last time. Our technical director, József Karszt, aka Uncle Jozsó is very up to date in this regard.

– Who could be one that scores this much?
– There are good attackers in NB I. I could mention Nenad Lukić who plays for Honvéd, or Ryan Mmaee of Fradi. For so many goals, minutes of play are needed which I had: I was not injured, and I haven't missed a training session since the summer. The 20 goals are in both of them, but 30 require extra performance.