Jim Tomsula has coached in the NFL for a total of thirteen years, one of which he spent as head coach of the San Francisco 49ers. His paternal great-grandparents emigrated from Hungary to the United States to seek their fortune, and the Hungarian identity has been an important pillar of his family's life ever since.

– When did you arrive in Hungary?
– Friday morning. Before that, we went to Lourdes. My family is Roman Catholic, so my wife, son, and I went to the site of the apparition of the Virgin Mary to get healing water – the Hungarian American football coach, Hungarian Bowl guest star Jim Tomsula began his story in an interview with Nemzeti Sport. – We flew from Pau Pyrénées airport to Charles de Gaulle and then to Budapest. But the Pau facility is very small, barely bigger than a living room, which is a bit of an exaggeration. Our flight was delayed, and we didn't make the connection, so we were accommodated in Disneyland's hotel in Paris. This could have been exciting, but we live in Florida in the USA, where we also have Disneyland, and I have been there many times. However, we happened to be visiting on Bastille Day, so we were treated to spectacular fireworks. Then at dawn, we were on our way to Budapest.

– You have a special connection to the Hungarian capital as your great-grandparents immigrated to the United States from here.
– Yes, my father's grandfather and grandmother. My great-grandfather was a coal miner in Clymer, Pennsylvania - just a stone's throw from Pittsburgh. He had two sons and two daughters, but unfortunately, when the oldest was nine, he died in a mining accident. My great-grandmother raised them alone while working at the local Catholic church. She washed, cooked for the priests, and sewed their clothes. Perl was her original last name – most changed it when they came to America – which she had carved on a stone on arrival at Ellis Island where immigrants were checked in; it is still there today. She was a small woman, but a true Hungarian, with a gritty personality. In the United States, she had to assimilate, so over the years, the Hungarian language was lost in our family, and I could hardly understand the stories she told me - I didn't speak Hungarian, and she didn't speak English well. But what we all understood was the food. The recipes have been passed down from generation to generation - they are not written down anywhere, but we still know them to this day, and every Christmas we have a huge feast.

– Did they not want to turn the famous Hungarian cuisine into a business?
– Of course, they did! My grandfather opened a restaurant in downtown Pittsburgh called The Hungarian Village. It was a traditional, ethnic place with musicians and delicious Hungarian food. The biggest sensation was when Zsa Zsa Gábor came to the area and visited the Village - I heard the story a million times from my grandfather. What left the greatest impression on me was how proud everyone in the community was of being Hungarian.

– Is that still true?
– Absolutely! My God, we are proud to be Hungarians! We can't wait to tell everyone who comes our way. We are incredibly proud of it. We are physically and mentally tough people, hard-working and loyal to our family to the very end. It comes first and foremost. That's what a Hungarian man is in my eyes. That's the way I was brought up - I get up in the morning, I work, and I've never opened a paycheck. Neither my great-grandfather, my grandfather, nor my father. I receive it, take it home, and put it in my wife's hand. Because it's not my money. It's my family's. And what I almost forgot: you shouldn't mess with a Hungarian man! Because then you're in trouble!

– Let's move on to the sport: in 2006, you were already coaching in Europe, in NFL Europe. Can this be considered an extended NFL scouting network?
– Yes, but the original goal was to promote the sport worldwide and to bring American players across the ocean who still need to develop to hit the NFL level. One of the biggest figures behind this is Tony Allen of Britain, who I think has done more to promote American football globally than anyone else. He spent three hundred days a year away from home and I learned a lot from him. Tony is now running an academy outside of London, which has been a dream of his for a long time – he invites athletes from different countries, who will probably end up with American university scholarships. He also works with many underprivileged athletes. That's his mantra, give me what's broken and I'll find a place for it. We will figure out how to be happy. But that's the beauty of American football that there's a place for everyone. For little, big, fast, and slow ones, for those who can throw, or those who can just kick - but even those who are good with computers can be video analysts or content producers. There isn't a person who can't find a job for themselves in the sport. 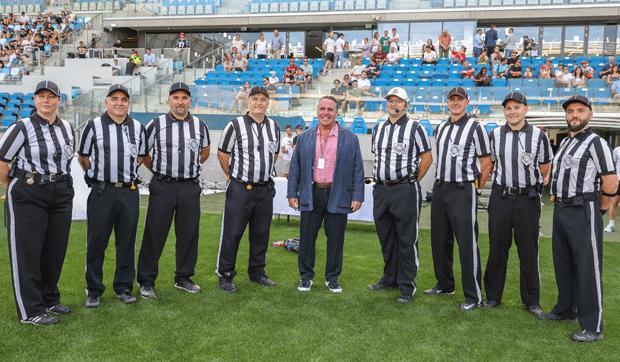 – What went wrong with the initiative?
– Ultimately, the NFL business. The European concept was linked to Paul Tagliabue, who was the league commissioner but retired in 2006, and Roger Goodell replaced him - and with new management came a new vision. My personal opinion is that it has eaten up too much money. However, I think NFL Europe is a success story because, in my thirteen years in the NFL, there hasn't been a game where I haven't run into someone who wasn't involved in the program.

– After the project was terminated, you joined the San Francisco 49ers, where you spent nine years. One of the highlights of that era was the 2013 Super Bowl, which became famous also because of the power outage immediately after halftime in the stadium in New Orleans. What happened, what was it like to experience it as an insider?
– I get asked that a lot. All I can say is that something always goes wrong. Always. But we're in the Super Bowl, a business in which billions of dollars are invested, and in one of the biggest stadiums in the United States, the biggest stage in American football, the lights go out for more than half an hour? To this day, I don't know what happened, but I can tell you that Baltimore's Hall of Fame linebacker, Ray Lewis, believes that our undercover man sabotaged it.

– But in the end, they came out better.
– Exactly. In any case, we were not idle during this time, we were constantly trying to adapt the strategy to the game on the field - but the spectators could not see this because only the emergency lights were working. But it was crazy what happened, we'll never forget it.

– Another highlight of your years in San Francisco is your appointment as head coach in 2015. All you got was one year on the bench, and then you were fired. Do you think it was rightful?
– Absolutely. Absolutely.

– Why do you think that?
– We work in a performance-based business. Before I accepted the job, I went home and told my family that I was facing the biggest challenge of my life. At the time, the club was going through a transition period, with the key players aging out. It was not an ideal situation, and there were a lot of issues to sort out off the pitch at the time. In addition, giving interviews was not my strong point, so I didn't have the best image among fans. I don't like being asked questions that I consider disrespectful, not to myself but my players. I also find it hard not to answer what I really think – I wear my heart on my sleeve. For heaven's sake, I am Hungarian! If I could start again, I would do the same, my conscience is clear. I don't resent the owners, they are excellent people, and I am grateful that they even gave me the opportunity. Plus, they paid a lot of money for it... 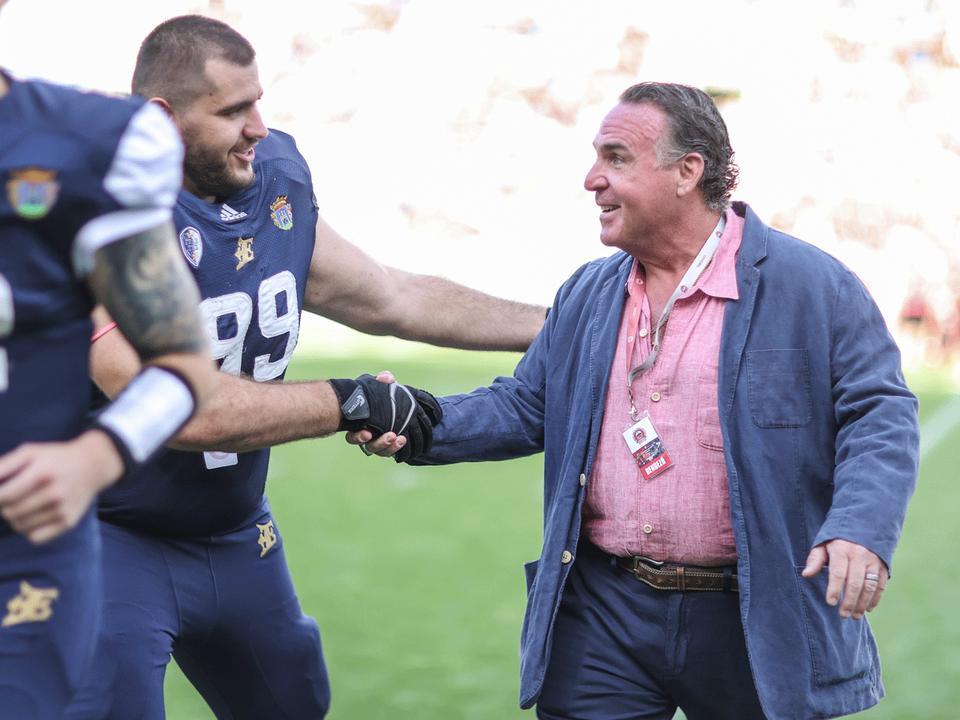 – After the NFL, you returned to the old continent to coach in the European League of Football. Do you think the ELF could be a worthy successor to NFL Europe?
– I would treat them as two separate things. It definitely has a raison d'être, it's the next step towards professional American football. I don't think we owe an apology to the teams that bring players to us because it's a natural progression. But we also need to work with the amateur leagues because they are the primary platform for training young players. And what else could be our mission but to make this sport more and more popular?

– You are obviously aware that the Fehérvár Enthroners will join the ELF next year. Is that why you watched the final with an observer's eye?
– Honestly? No. I just enjoyed watching American football in Hungary.