The Athlete of the Year Gala: “Call me Zsuzsi in the article, not Susan”

Zsuzsanna Francia, two-time Olympic champion rower doesn't forget, even living in the United States, the beach in Kisújszállás in Hungary, the smell of cocoa rolls, the embracing tranquility of the small town. She is not Susan, but Zsuzsi, because that's how her father, Béla Francia and mother, Katalin Karikó call her at home. Her mother has recently become world-famous for developing the first clinically proven COVID-19 vaccine based on her patent.

– Were you surprised when the Hungarian Sports Journalists' Association contacted you on holding The Athlete of the Year Gala online?
– It was unexpected, but I was very happy because I was always a big fan of Hungarian sports with my grandma. When she was alive, I spent a lot of time in Hungary every year, and we watched the Olympics, the football matches or the Formula 1 broadcasts together. Next to her I became a true Hungarian fan. In addition, I got the chance to personally meet several Hungarian athletes during my sports career.

– For example?
– I met rowers Kati Kovács and Natasa Janics while they were training in San Diego, California, USA. It was interesting to see their training session because it's different from the U.S. There was a funny incident when we all went to train on water at the same time. I was in a single scull and I was very concentrating on rowing well when Aunt “Kati” (Hungarian Coach Katalin Fábiánné Rozsnyói – the editor) yelled at one of her girls for bad posture. I suddenly thought she called me: “Wow – I told myself – I have to row nicer!

– You've tried several sports before rowing. What made you decide on it?
– I chose this sport pretty late, during my university years. Because I'm quite tall, hundred and eighty-eight centimeters, I tried out basketball and athletics as well, but with not much success. Then in college, I could try out different sports, and I found out on one of the rowing machines that I was good at pulling. The coach was amazed and said, “There's power, but you need will and endurance for the sport. If you have them all and train properly, you could even go to the Olympics.”

– Did you believe in it?
– Of course. I called my parents right away that I'd decided to try to go the Olympics in rowing. Because they remembered my basketball and running competitions, they just smiled and said, “Okay, Zsuzsi, of course.” Then there was the time when I was invited to the USA national team.

THE GRANDCHILD IS NEXT

– How unique is it that someone finds her sport at the age of 19 and become a 2-time Olympic champion in it?
– Here, in the U.S., collegiate sport is on a high-level, a lot of money is put into it, so there is an opportunity to improve. In fact, half of the 8-member rowing crew from 2008 found rowing in college, so maybe my situation is not that unique.

– How much do you miss rowing from your present life?
– Not the sport itself, but the crew is that I miss. We have strived and dreamed together of going to the Olympics and winning one day. But I don't miss the struggles, the pain in my waist and ribs. I have lived beautiful years on the water, it was extraordinary winning in Beijing, and we were proud that we defended our title in London. It's a different feeling to win by being unknown and standing on the top of the podium, and it's also a different feeling when you're the best in the world and everyone wants to beat you. Anyway, I've always admired athletes who were able to find the motivation to keep going year after year. Let's say Kati Kovács who, I don't even know exactly how many Olympics she was in, she was successful for many years. Now some of my old crew members have started training again, but I wouldn't be able to do that anymore. My body said thank you. Those ten years were enough in which there were ups and downs, and in fact, there was a time when I wanted to stop. But overall, I enjoyed every minute of the sport. And what's very important is that the lessons I got from workouts or competitions all come in handy in my work now.

– You are in the same field, biotechnology, as your mother. Do you talk a lot about the job?
– We talk about our jobs, and she always lets me know about one or two interesting studies that are worth reading. Of course, we also have other topics to discuss.

– I assume you are your mother's biggest fan.
– Yes, the roles have changed now... At the time she supported me in the sport and in my studies, now here I am feeling proud of her success. When I was younger, she would always make me sit down with my father, and talk about her achievements, what she found and learned from her research. We obviously didn't understand everything, but we were happy about what she told us. Now that I'm expecting a baby, my husband funnily remarked that my mother will probably also make him sit down and talk to him about the technology and research. She will tell him like a bedtime story.

FROM TOFU AND BROCCOLI TO LAMB STEW

– How does your mother-daughter day look like?
– We converse a lot, and sometimes we row on the rowing machine. If I'm at home, I always have to eat something Hungarian that she made. She is a great cook of Hungarian food, soup, stew. Sometimes she makes my father lamb stew or tripe. 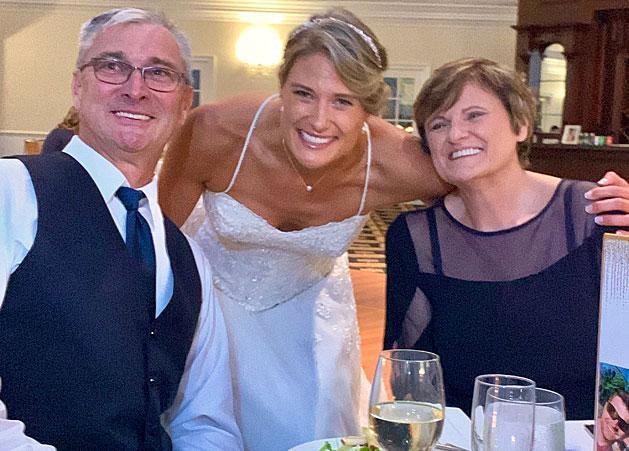 – Do you like it?
– Here in California our taste world is different. I usually eat tofu, broccoli, spinach, but if I'm at home, I like to eat egg barley or Lebbencs soup, a Hungarian pasta soup for which my mother makes the pasta herself! Sometimes I wonder how she has time for everything?!

– What is something that you learned from her and you thank her for?
– I definitely didn't learn cooking from her, because I can't do it. Maybe the will to fight. She never hid it from me that life is not always easy and is not a bed of roses. Her life wasn't always good either, she wasn't always in the right position, but at the same time, her example showed that we shouldn't give up if we believe in something; it's worth fighting for. Mom believed in her technology, that it would work, and lo and behold, she is now saving lives all over the world. I'm proud of my parents because they are hardworking people; they don't stop working on the weekends either. I sometimes have to tell them to sit down and rest for a while. When I was younger, Dad used to say, “Zsuzsika, if you start something, do it properly, because if you don't do it properly, there's no reason to even start it!” It stuck in my head, so I always wanted to get the best out of myself during trainings. By the way, can I ask something? Call me Zsuzsi in the article, not Susan. Because I'm Zsuzsi, that's how my parents call me at home and that's how people know me in Hungary as well.

KISÚJSZÁLLÁS IS THE SAFETY NET

– When was your last time here?
– I couldn't come in 2020, but prior to that, I came every year and spent many summers here. Unfortunately, my grandmother passed away, but I visited my aunt in Budapest who is also my godmother. I have a tight relationship with her. I never forget the years in Kisújszállás. There was a time when I spent three months there with my grandma. I helped her bring the eggs from the hen cage, I went to the beach or the bakery for cocoa rolls or bread by bike. I loved the small-town atmosphere. There are happy feelings about Kisújszállás, I somehow always felt at home there. I'm grateful for the fate that I was able to grow up to experience the atmosphere of a small town as a little girl where I was safe, yet I could be independent. You can get everywhere by bike here in San Diego as well, and while I don't want to live a small-town lifestyle, I really want my children to have that feeling, too. If they could have their own “Kisújszállás.”

"I also have the undisguised aim of helping young players move to stronger leagues abroad."

Tennis: Babos and Mladenovic to play together again - NSO

According to the preliminary entry list and Babos' mysterious social media posts, they are back together.

An extraordinary portrait film about the five-time Olympic champion will be released in movie theaters on December 8.

Keleti Ágnes
Fencing: Jenő Kamuti woke up from a coma – he still has plans - NSO

Athlete of the Nation was previously hospitalized for kidney failure and infection.

fencing Jenő Kamuti
Mourning: Csapó Gábor has passed away at the age of 72 - NSO