There had been plans and ideas of a big stadium in Budapest dating back to 1896, when it had been suggested that the first modern Olympic Games could be in the Hungarian capital. After the initial unwillingness, Greeks decided to organise the Olympics in Athens, nevertheless, the plan of the stadium remained a case at issue. The influence of the international success of Hungarian sport intensified this need even more. We got the right of organisation for the 1920 Olympic Games in 1911, but World War I balked the plans. 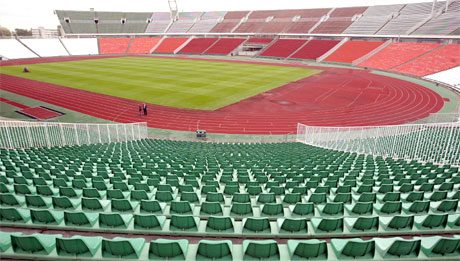 The first ideas dreamt the stadium to the Vérmező, but there were other plans, too, like the Nádor-kert in district XI or the precincts of Kerepesi út, from where the Hungarian Equestrian Association had moved away. However, economy didn’t make it possible to begin a big sport investment. Later, the issue got great publicity. A new law was accepted concerning the building of the stadium in 1924, sport tax was introduced as well – although the raised money wasn’t spent on the building of the arena. This year, Alfréd Hajós Olympic swimming champion won intellectual Olympic silver medal with the plans of the stadium, however, his ideas weren’t came true either. At the beginning of the 1930s, the arena was thought to be placed to different places like to the side of Gold Hill, to the City Park, to Margaret Island or to Népsziget, Lágymányos, or to Pasarét, but the war hindered the realisation again.

The parliament passed the costs of the stadium in 1945, which were taken into the 3-year plan as well. The Építéstudományi Intézet (ÉTI) was entrusted with the examination where to build the stadium. In 1947, the tribune of Ferencváros football field on Üllői Road split off on a football match on which the Hungarian national team played against Austria. 250 people fell down, and it was only a near go that nobody died. It speeded the preliminary work and in 1948, the designers of ÉTI, Károly Dávid, Jenő Juhász and Ferenc Kiss made the first sketches. They envisaged a stadium that can hold 70,000 people on the area enclosed by Kerepesi Road, Dózsa György Road and Thököly Road. The building was planned to be built from prefabricated elements in 90 %, the architect was Károly Dávid, while Jenő Gilyén was responsible for its statics. Later, they wanted to enlarge the stadium to be able to hold 100,000 people. The bleachers are hold by 18 huge masts, marathon gates were built on its northern and southern sides. On the western side, a honorary-box was built, and on the eastern side they planned the changing-room and the outlet where players go out to the football field.
The building operations – without definite plans – began on 13th July, 1948 by the Stadionépítő Vállalat. 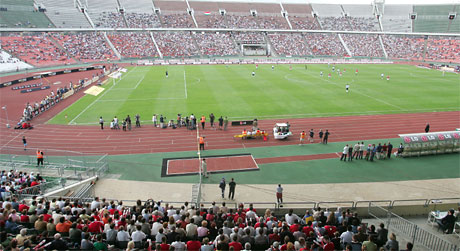 The first spit was done by Gyula Hegyi, the president of the Committee of Physical Education and Sport (OSTB), on the 27-acre big site of the former race-track. The residents of the capital stood up for the case zealously, plenty of people worked as volunteers like Ferenc Puskás and other members of the Golden Team. The prefabricated elements, among of which were the 20-24-ton reinforced concrete balks as well, were produced at the site in seven mills. 664,000 stere of earth was moved, 84 huge machines used by building worked at the site like cranes, engines, excavators, conveyors, rollers and concrete mixers, just to mention a few. During the work, they used 45,000 stere of concrete, 2,500 tons of ferro concrete, and they placed 24,000 tribune elements and 15,000 stair elements. They needed 18,000 lamps to the lightning and the electric score indicator. There was built in 150,000 metres of cable. The costs were around 1,600,000 Hungarian forints according to then prices. The stadium was almost redesigned during the works according to the terms of architecture of socialist realism, but finally it was cancelled because of money and time shortage.

After Radio Free Europe announced, that the balks had cracked so it wouldn’t succeed to finish the building by the allotted time, four ministers were given the responsibility for the 20th August, 1953 accomplishment and Mihály Farkas, minister of war department, detailed 1,000 soldiers to help in the building operations. Finally, the prestige investment of the era was completed officially with a capacity of 78,000. The planned tribune with a capacity of 100,000 was never realised. 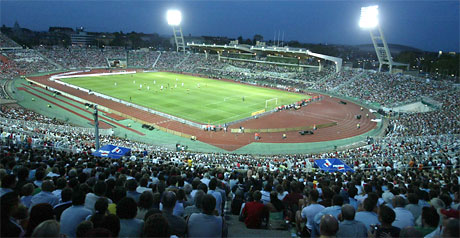 The opening of Népstadion was a big festival with a parade and trooping of colours. Avery Brundage, the president of International Olympic Committee (IOC), was present as well. He was seated on the terrace for the press because Mátyás Rákosi, ‘the big leader of the people’, was not willing to share the honorary-box with the resident of an imperialist country. 12,000 gymnasts had done gymnastics, then 2,100 sportsmen marched around the running track. After that Gyula Hegyi, the president of OTSB, delivered the opening speech. The Hungarian flag was flown by József Csermák, Olympic Champion hammer thrower, to the national anthem. At this moment, 10,000 pigeons were let flown, and then it was followed by the second day of the Norway v Hungary athletic meeting. The Hungarian team won in the proportion of 140,5:71,5. Then the Hungarian team won 3:2 on the Budapest Honvéd v Spartak Moscow football match. The closing scene of the gymnastic performance was a pyramid emerging from a red star on the top of which the female figure of the Liberation Monument could be seen. After that, the program continued with the appearance of the 400 member folk dance group, and the series of programs was closed by the match of the Hungarian A v Hungarian B national teams of women, where the result became 7:3.
The first director of Népstadion became Imre Németh, the Olympic Champion hammer thrower. The arena got electricity lightning constructed to four ferro concrete pillars in 1959, and the stands were enlarged so as to hold 83,000 people. The stadium gave place to plenty of sport events like, for example, the World Cup of Colleges in 1954, the Hungary v England football match, where the Hungarians won 7:1, or when József Kovács won over the Soviet Kuc in the 5,000-metre running, just to mention a few. The most spectators were on Austria v Hungary football match in 1955, which was viewed by 104,000 people. Later, the standing places were dissolved, which reduced the holding capacity.

A lot of cultural events and mega concerts were also held in the stadium during the last decades. In the 1990s, the structure of the upper stand was fixed during the renewal of the construction, and the press-box was covered. The stadium was renamed after the legendary footballer to Stadium Ferenc Puskás in 2002.
Szóljon hozzá!
0 hozzászólás. Szóljon hozzá Ön is! Még senki sem szólt hozzá. Legyen Ön az első!