God created him to be a football player

He could also be a tinker or a baker, a postman or a metal-worker. But Ferenc Puskás became a football player – one of the best ever players of the World. The best is ours. From Kispest to the world-wide fame. On the other hand, the amazing talent of the son of the semi – professional player has appeared soon, and the left legged forward player became a famous, famed football player in seconds. He could not be anything else. 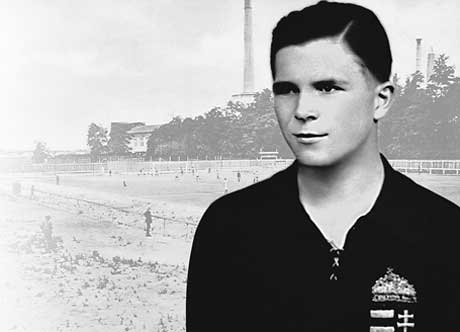 His Records: the most goals in one match (7, 19. February 1949.), the most goals in a season (50, 1948), the third most efficient football player in the XX. Century (489 goals), the third most efficient football player of Hungary (357 goals, 1943-1956), the top goal scorer of the Hungarian cap (84 goals), the 13. most efficient player in the Spanish league (155 goals, 1958-1967), the third top goal scorer in the European Cup of Champion Teams
His talent and his amazing ball-sense were born with him on the 1 April 1927 in Zugló, at the Uzsoki street Hospital. His parents, if they had wanted to, they should not have sent their son elsewhere, whose room’s window (not his own room’s one, but the only room’s one of the family) was faced to the Kispest AC football ground.

Yes, Kispest. The Purzeld (the father changed his family name to the Hungarian Puskás only in 1937) family moved to the nowadays not existing small flat at the Újteremtő street in 1929, when the householder became a justified football player of Kispest. However the Puskás family did not escape from the poorness relevant to those ages and the hardly upgrading working class, “Öcsi” (his Hungarian nickname meaning Little brother) - since his most known nickname came from home – had a happy, balanced childhood. It was completely fulfilled with football. Since there was no other possibility to spare time activity, local children played football at the ground near the house of the parents all day. Nevertheless, the father, the neighbours, and the passers on the street pointed out, that the small left legged kid is smarter than the others are. The all day long abandoned football play, the cheeky dodges and huge goals were just disturbed by the mother sometimes, when she sent her little son to the near tobacco shop for cigarette or anti-headache candies.

Moreover, the little Öcsi was an obedient, good boy at home, while he absorbed the everyday roguery of Kispest streets. However, who would believe, that the most famous Hungarian of the world loved animals? He was hardly 10 when he stole home a mouse found on the street. Then at home he put it in a jar, fed and watered it, and took care of the little rodent as a good keeper. Once the mouse escaped, ran away and nobody found it again. But Öcsi’s mother was very astonished realizing that it tried all the food in the larder and all the bags were fret. Auntie Manci clobbered Öcsi well this time.

A few people know that Ferenc Puskás liked to read. His favourite childhood books were the cheap Indian- and cowboy stories, which were very popular that time. And when he could afford from his pocket money, he ran to the Royal cinema at the Üllői street. But he did not spend his forints on comedies; he liked the gangster and wild west stories with gunfight.

While calling back his childhood we have to mention his friendship with József Bozsik. It is an unbelievable, fabular story, but the world famous grown ups had been friends since their small childhood. The Bozsik family happened to live in the same house where Puskás’s did, and since both boys, Öcsi and Cucu also loved football, they became friends soon. When they did not run around the ground, they sloped round the streets. They often raced with the running yellow tram at Sárkány street (today it is Ady Endre street), and sometimes when they had no money for tickets, they dig under the fence and crept to the stadium. At times they stole stockings to make rag-ball.
He finished the primary school in Kispest. However he was not an eminent schoolboy, but he completed the eight mandatory classes without failure.
Cowboy stories, movies, pets and the girls from Kispest – the wildest 30s were still about them, but everybody already knew that.

Éva Puskás, younger sister of Ferenc Puskás: Öcsi always stole mum’s stockings because the rag-ball was made of it. He knew it very well how to make and compact the rag-balls. He was not interested in anything else in his childhood, but football and fellows. However, he was not a bad boy who is just maundering and mooching on the streets. He did not go anywhere in the evenings. If there was no football match to be played, he was at home. He liked to read and we used to go to cinema as well. Of course, he was not interested in romantic films that I wanted to see. Just the cowboy movies with gunfight. We were not rich, but we have a happy and beautiful childhood. We lived in a small flat with one room and a kitchen near the Kispest ground. We had only one room and five of us slept in it. However, we were happy.

László Bozsik, the long ago neighbour of Puskás’s, younger brother of the legendary József Bozsik: „He always bought himself some sweets, and he could have one candy in his mouth for hours, and anyhow we asked him, he did not give us one either. That time of course he was a very young child, later he helped anybody in anything. We had a brilliant friendship, and everybody knows that he and my brother Cucu were kittens in a basket, they became football players together. He loved to play football very much, and he could go by train for hours for a little football play during the war period. That time we survived the bombings in the Kiskunság, and small cups were organized there where there was no need for a certificate, anybody could play. So “Öcsi” traveled to us just to play.

István Cserjés, Puskás’s childhood friend, and colleague player in Kispest: „Me and “Öcsi” were born in the same year, we played together on the ground, then in Kispest. There was a sanded site among the houses where we played a lot in our childhood. I am just saying it because it is often said about the Brazilians that the sand develops the skills very well. So, we have the sanded playground just like they had at the beach. Öcsi loved to play football so much that he came to play at the square even when he was NB I (1st Level National League) player. I remember his father, who was his coach at Kispest, shouted from their balcony to stop playing since Öcsi had a championship in the evening. We knew that he would be a great football player.
Szóljon hozzá!
0 hozzászólás. Szóljon hozzá Ön is! Még senki sem szólt hozzá. Legyen Ön az első!